Members of the Winchester Family (Supernatural) are some of the greatest hunters of the unnatural in history.

"When I was 7, I strangled my 1st parrot, flushed my first goldfish and punched my 1st snake. Now, I have finally reached the moment that I've been preparing my entire life, the pinnacle of my career, to hunt the king of the beasts! "
― Chantel Dubois (Madagascar: Europe's Most Wanted)

"I am the great Umibozu, the best alien hunter in the universe."
― Umibozu (Gintama)

The power to possess extraordinary talent and instinct in/for hunting all things.

The user possesses extraordinary talent and instinct in/for hunting all things. They can track anything under any conditions, sense the weaknesses of their prey and exploit them and finally kill or capture their prey. 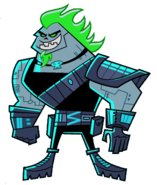 Skulker (Danny Phantom) is known as the Ghost Zone's greatest hunter and is constantly hunting rare and powerful ghosts to put on display.

Catman (DC Comics) is a skilled hunter of jungle cats who has since moved on to bigger prey, i.e. The Batman.

Hunters (Supernatural) are humans who hunt, track and kill supernatural beings such as monsters, demons, ghosts and other creatures that go bumped in the night.

Mike Johnson (The Almighty Johnsons) as Incarnation of Ullr.

The Yautja (Predator series) known colloquially as the Predators or Hunters, are an extraterrestrial species characterized by their hunting of other dangerous species for sport and honor, including humans.

Goblin Slayer (Goblin Slayer) is an expert in hunting Goblins, with complete understanding of goblin's behavior.

Link (The Legend of Zelda: Breath of the WIld) is able to track and hunt any animal or beast as part of his survival skills. 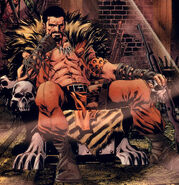 Baransha and Garza (Zatch Bell!) use hunting tactics when battling their enemy. Just like a hunter trapping the prey, these two lead other mamodo teams into their turf and wait for the perfect time to strike.

Bloodhound (Apex Legends) is an amazing hunter, his ability to track and anticipate the movements of another squad can turn the tide in battle.

Gaston (Disney's Beauty and the Beast)
Add a photo to this gallery
Retrieved from "https://powerlisting.fandom.com/wiki/Hunting_Intuition?oldid=1654147"
Community content is available under CC-BY-SA unless otherwise noted.