Use the traits of Hydra.

The ability to use the abilities of Hydra. Variation of Mythical Bestiary and Reptilian Physiology.

The user is or has the ability to take on the form of Hydra, an ancient nameless serpent-like chthonic water beast, with reptilian traits, (as its name evinces) that possessed many heads, and for each head cut off it grew two more, and a poisonous breath so virulent even her tracks were deadly. 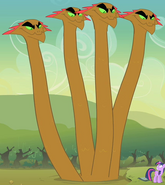 Hydra (God of War)
Community content is available under CC-BY-SA unless otherwise noted.