The Breath of Water (Demon Slayer: Kimetsu no Yaiba) combat style mimics the flow and adaptability of water and infuses it with the users swordsmanship.

Combine physical combat with the water.

The user is able to utilize water with their physical combat, using it both as weapon and defense, summoning waves to batter their opponents or whips to cut or bind.

Suija (SNK) can fight with water. 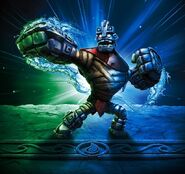