As long as the nucleus in his head is intact, Cell (Dragon Ball series) can recover after every near fatal experience. Additionally, thanks to his Saiyan cells, he is able to use the Saiyan Power to recover and become even more powerful, becoming Super Perfect Cell.

Enter a state that allows one to exceed their limits and acquire greater power.

"And this... is to go even further beyond!"
― Son Goku to Majin Buu and Babidi (Dragon Ball series) when transforming into a Super Saiyan 3 for the first time.

"Gohan's power has grown far beyond mine. When we were training in the Hyperbolic Time Chamber, I knew he had hidden strengths, but I never knew he would ascend to this level."
― Son Goku to the Z-fighters (Dragon Ball series) when talking about Gohan's power as a Super Saiyan 2.

The ability to transform into a state beyond Super Form where one's powers and potential are strengthened to a higher degree.

The user can transform into a state beyond Super Form that greatly increases the user's power, giving them an even larger increase in strength, speed, and skills, as well as gaining new abilities and having their previous ones strengthened to an even greater league of power.

...In this form, Saiyans surpass the power of an Ascended Super Saiyan and an Ultra Super Saiyan, allowing them to increase their strength while maintaining their speed.

...In this form, Saiyans surpass the power of a Super Saiyan 2, using power extracted from every drop of their blood.

Son Goku and Vegeta (Dragon Ball GT) are the only known Saiyans to have achieved the Super Saiyan 4 transformation. In this form, Saiyans are at their strongest, with all of their power drawn out to its utmost limits. 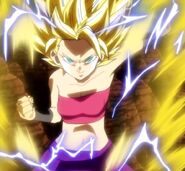 Kale's (Dragon Ball Super) Legendary Super Saiyan 2 form not only makes her stronger than the initial one, but also allows her to retain full control over herself.

During his participation in the Tournament of Power, Cabba (Dragon Ball Super) obtained the Super Saiyan 2 transformation.

Given that her fusees, Caulifla and Kale, posses the Super Saiyan 2 and True Legendary Super Saiyan transformation, Kefla (Dragon Ball Super) is able to incorporate both elements of the forms into her Strengthened Super Saiyan 2 form.

...and Gear Fourth: Tankman, which focuses on defense...

...and Gear Fourth: Snakeman, which focuses on offense and speed over defense.

By using his Alter power at it's maximum, Kazuma (s-CRY-ed) becomes harmonized with his Shell Bullet and is able to access his strongest form, Proud Fist.

Much like Kazuma, Ryūhō (s-CRY-ed) can use his Alter power at it's maximum, becoming harmonzied with his Zetsuei, allowing him to access his Zetsuei Touryudan form.
Add a photo to this gallery

By "sundipping," Superman (DC Comics) immerses himself in the sun and absorbs massive amounts of solar energy, greatly powering him up.

As the World Breaker, the Hulk (Marvel Comics) is at his most powerful, capable of breaking entire worlds.
Add a photo to this gallery

Type Tridoron is Kamen Rider Drive's ultimate form. It is a fusion of Shinnousuke, the Drive Driver, and all 26 Shift Cars with his car Tridoron acting as the armor.

Shishi Red's ultimate form, Shishi Red Orion (Kyuranger) is accessed through the use of the Saiko Kyutama, allowing him to combine the powers of all 12 Kyurangers along with the great power of the Orion System. 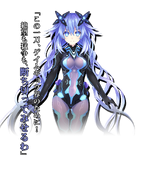 Using the Hyper Share Crystal Neptune along with the 3 other Goddesses Noire, Blanc and Vert (Hyperdimension Neptunia series) gained access to a transformation called Next Form that vastly surpasses their previous Hard Drive Divinity transformation.

Hyper Sonic (Sonic the Hedgehog series) is a transformation that Sonic can achieve when he collects all seven Super Emeralds. In his hyper form, possesses all of the abilities of his super form at a much greater level.
Add a photo to this gallery
Retrieved from "https://powerlisting.fandom.com/wiki/Hyper_Form?oldid=1513387"
Community content is available under CC-BY-SA unless otherwise noted.