The ability to exert a greater kinetic force than humanly possible. Sub-power of Kinetic Energy Manipulation. Variation of Disproportionate Force.

The user can exert an enormous amount of force without much effort.

...can strike with superhuman force.
Add a photo to this gallery 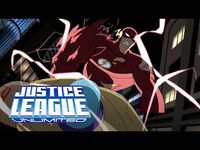 Flash uses The Speed Force and shows his true power to Brainiac - Luthor - Justice League Unlimited
Add a photo to this gallery
Retrieved from "https://powerlisting.fandom.com/wiki/Hyperkinetic_Exertion?oldid=1701015"
Community content is available under CC-BY-SA unless otherwise noted.