Zombozo (Ben 10 2016 Reboot) uses the energy of his wand to hypnotize others.

The user can create, shape and manipulate the hypnotic energy, the energy associated with altered states of mind and mind control.

Alexi Garnoff/Blind Faith (Marvel Comics) could emit hypnotic light from his eyes, allowing him to control his opponents.

Selena Slate/Spectra (Marvel Comics) can use her light to hypnotize. 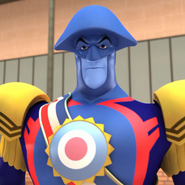 Malediktator (Miraculous: Tales of Ladybug & Cat Noir) has the power to generate energy spheres that force those who touch to obey his commands. 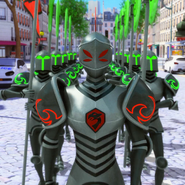 Darkblade (Miraculous: Tales of Ladybug & Cat Noir) is able to create energy from the shield that turns people into his knight minions.
Add a photo to this gallery
Retrieved from "https://powerlisting.fandom.com/wiki/Hypnotic_Energy_Manipulation?oldid=1388416"
Community content is available under CC-BY-SA unless otherwise noted.