Kung Food (Miraculous: Tales of Ladybug & Cat Noir) was able to control the minds of those that ate his Celestial Soup.

Hypnotize others with food.

"This éclair is over one million calories. Twenty-five pounds of butter per square inch. Covered with chocolate so dark that light cannot escape its surface."
― French Chef (The Simpsons)

"Chefs were originally meant to serve, eventually there appeared dark chefs who used the power of cooking to control the hearts of men."
― Ichiro Ikesu (Kamen Rider Kabuto)

The power to hypnotize others via food. Technique of Food Manipulation. Variation of Hypnosis.

User can create a type of food (drinks, soups, salads, platters, etc.) which allows them to affect or directly influence other people's minds to their commands.

Mother Mae-Eye (Teen Titans Series) is able to hypnotically control those who ingest her pies.

Pizza Face (Teenage Mutant Ninja Turtles) is a mutant that can control anybody that eats his pizza.

When used to prepare food, The Black Knife, (Kamen Rider Kabuto) an ancient demonic knife passed down by dark chefs, can imbue it with hypnotic powers that controls the consumer's mind. 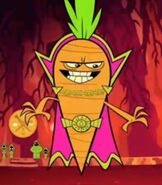 Vegetor can mind control anyone who eats vegetables and turn green.
Add a photo to this gallery
Retrieved from "https://powerlisting.fandom.com/wiki/Hypnotic_Food?oldid=1503879"
Community content is available under CC-BY-SA unless otherwise noted.