"You are ice and fire, the touch of you burns my hands like snow."
― Amy Lowell

The user can create and manipulate ice with fire properties, fire with ice properties, or both ice and fire simultaneously.

Leviathan, the Argentous Phantom Flame of Hades (Code:Breaker) burns away the heat from the area to freeze its target, placing it in hibernation state...

...and Mammon, the Dichromatic Twin Flamberges of the Netherworld produces flames of dual-colored flames, one hot and one cold. 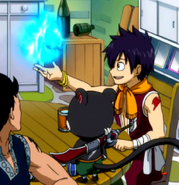 Thanks to her Lovix form, Bloom (Winx Club) can use both the power of ice and her Dragon Flame source of magic.

Ice (D.Gray-Man) releases Ice Fire, which burns at -100 degrees Fahrenheit and causes victims to burn and rot.
Add a photo to this gallery
Retrieved from "https://powerlisting.fandom.com/wiki/Ice-Fire_Manipulation?oldid=1580522"
Community content is available under CC-BY-SA unless otherwise noted.