The user can create and launch spheres made of ice or containing ice energy. Unlike Fireball Projection, which usually is in the form of a flame, ice has a real form and thus deliver more kinetic force against its target. The user might be able to project spheres of ice or ice energy without the sphere to form on the user's palms. 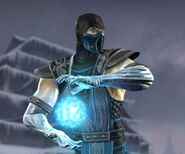 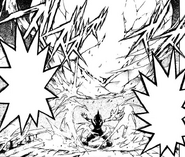 Girom (Marchen Awakens Romance) can combine all the ice created from his ÄRM, Iced Earth into one giant ball and hurl it at his opponent.

Mark Mardon/Weather Wizard (The Flash 2014 series) produces a balls of ice made of hailstorm ball.
Add a photo to this gallery
Retrieved from "https://powerlisting.fandom.com/wiki/Ice_Ball_Projection?oldid=1515137"
Community content is available under CC-BY-SA unless otherwise noted.