Create constructs made out of ice.

The power to create tools, objects, weapons, armor, and even appendages out of Ice. Sub-power of Ice Manipulation. Variation of Hydrokinetic Constructs and Solid Constructs.

Ur (Fairy Tail) using Ice-Make: Rosen Krone to create spiked roses made out of ice.

...conjuring powerful ice gauntlets to beat down another high class ice Mage such as Invel.

... along the wardrobe change.

Wargo (kofi) is capable of creating an ice jail. 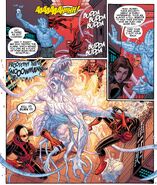 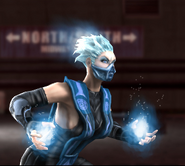 Kuzan/Aokiji (One Piece) can create different constructs out of ice, such as tridents.

Frosta (She-Ra and the Princesses of Power) can create numerous objects out of ice, like platforms...

Taydeus (Charmed 2018)
Add a photo to this gallery

Mortal Kombat X - official trailer (2015)
Add a photo to this gallery
Retrieved from "https://powerlisting.fandom.com/wiki/Ice_Constructs?oldid=1750814"
Community content is available under CC-BY-SA unless otherwise noted.