The power to transform matter into ice. Technique of Ice Manipulation. Variation of Water Transmutation. Not to be confused with Freezing.

The user can transform matter and objects, including living beings, into ice.

Danny Fenton/Phantom (Danny Phantom) can freeze any object he touches into solid ice to free himself from villains grasps and break it effortlessly.

Kuzan/Aokiji (One Piece) using Ice Time to freeze his opponent...

Nieves (Los Protegidos) can freeze anything she touches. 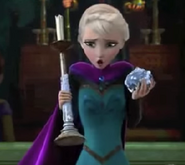 Elsa (Frozen) can freeze anything that she touches

The Ice Bird (Angry Birds Space) can freeze anything that he touches. 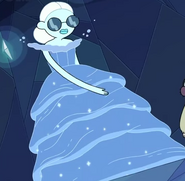 When her elemental powers reached its peak through her mega-spell, Patience St. Pim (Adventure Time) was able to turn everyone and everything around her into ice, as well as make them more depressed in behavior.

As the Snow queen and a sorceress of great power, Lumi (Fables) can turn anything into ice.

Big Chill (Ben 10)
Add a photo to this gallery

Mortal Kombat X - official trailer (2015)
Add a photo to this gallery
Retrieved from "https://powerlisting.fandom.com/wiki/Ice_Transmutation?oldid=1715722"
Community content is available under CC-BY-SA unless otherwise noted.