Boss Smiley (DC Comics/Vertigo Comics) is a being whose presence can be seen through his iconic smiley-face.

Use the traits of icon.

The power to use the abilities of icon or popular image.

User with this ability either is or can transform into icon: image, symbol, picture, or other representation of concept, idea, system, etc. Their powers differ greatly based upon what the iconic being represents, whether is is an advertisement, a recognizable picture or some other source. 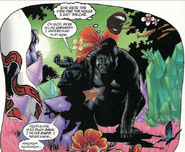 The Weeping Gorilla (Promethea) is a character on a series of single-panel comics that exists in Immateria
Add a photo to this gallery
Retrieved from "https://powerlisting.fandom.com/wiki/Icon_Physiology?oldid=1587361"
Community content is available under CC-BY-SA unless otherwise noted.