The ability to steal the identity of another person. Sub-power of Identity Manipulation.

The user can steal someone else's identity, becoming that person and discarding their former one or giving it away to another. The user rearranges the target's records even that person's entire existence can be effected in order to gain access to target's assets and/or replacing that person from the memories of their friends and family; inducing Mental Nonexistence to the victim. The user may also gain the person's appearance and/or abilities in the process. 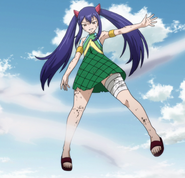 Irene Belserion (Fairy Tail) enchants herself into Wendy, stating that it is more than possession, she had become "Wendy Belserion".

Shana (Shakugan no Shana) was able to absorb the remaining essence of Yukari Hirai, allowing her to assume her existence and identity but without changing her actual form or appearance.
Add a photo to this gallery
Retrieved from "https://powerlisting.fandom.com/wiki/Identity_Theft?oldid=1427492"
Community content is available under CC-BY-SA unless otherwise noted.