Use the traits of Ifrit.

"It's a djinn that controls fire... It's called an Ifrit!"
― Shahra

The power to use the abilities of an Ifrit. Variation of Demon Physiology and Genie Physiology.

User with this ability either is or can transform into an Ifrit (also efreet, ifreet, afreet, afrite, afrit), supernatural creatures in Arabic and Islamic cultures. An ifrit is an enormous creature of fire, either male or female, who lives underground and frequents ruins. They are a group of Jinn noted for their strength and cunning.

Ifrits live in a society structured along ancient Arab tribal lines, complete with kings, tribes, and clans. They generally marry one another, but they can also marry humans. While ordinary weapons and forces have no power over them, they are susceptible to magic, which humans can use to kill them or to capture and enslave them. As with the jinn, an ifrit may be either a believer or an unbeliever, good or evil, but they are most often depicted as a wicked and ruthless being. 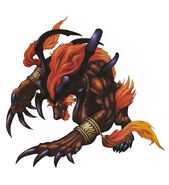 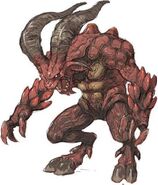 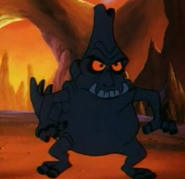 Magma, Lord of Volcanoes (Aladdin TV series)
Add a photo to this gallery
Retrieved from "https://powerlisting.fandom.com/wiki/Ifrit_Physiology?oldid=1696410"
Community content is available under CC-BY-SA unless otherwise noted.