Bell Cranel (DanMachi) activates Firebolt spell while stabbing his enemies to burn their body from the inside.

"I'll burn you and cut you in half!!"
― Napoleon to the Straw Hat Pirates (One Piece)

The ability to combine slashing attacks with fire. Variation of Combustion Inducement and Elemental Slash. Combination of Fire Infusion and Cutting.

The user can combine fire to attacks with bladed weapons.

Genryūsai Shigekuni Yamamoto (Bleach) wielding his Zanka no Tachi, which causes whatever it slices to once burst into flames, but 1000 years later to be burned out of existence.

Rei Ōgami (Code:Breaker) is so well versed with Iaido, he managed to use sheer friction to cause the wound to burn. 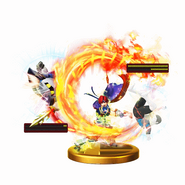 Roy (Fire Emblem series/Super Smash Bros. for Nintendo 3DS and Wii U) can use his Critical Hit to severely damage his opponents with a powerful fiery slash.

When Kratos (God of War series) was on his quest to sever his ties with Ares, he aquired the Fire of Ares, allowing him to infuse his Blades of Chaos with fire and incinerate his foes with powerful slashes.

When Kratos (God of War series) aquired Thera's Bane in his quest to find his brother, he became to infuse his Blades of Athena with powerful flames, burning his foes with every slash and even implant searing cores into his enemies which will explode after a few seconds.

Emi Yusa (The Devil is a Part-Timer!) slashing Lucifer with holy fire.

Sasuke Uchiha (Naruto) using the Sword of Kagutsuchi, which will cause anything it stabs or slashes to burst into black flames.

Mui (Naruto) using Heavenly Prison Fire Sword, which will cause whatever he pierces with to burst into flames.

Conditionally, Whenever Roronoa Zoro (One Piece) is on fire, he can use the flames around his swords to his advantage and slash with his Yaki Oni Giri to set his opponents ablaze...

...and used Hiryu: Kaen to slash Ryuma, causing his wound to burst into flames.

Kin'emon (One Piece) using Karyu Issen to slash through Vegapunk's dragon, causing it to burn upon slicing.

Caesar Clown (One Piece) concentrating oxygen with a lighter to form his Blue Sword that can burn down his own lab with one swing.

Hiei (Yu Yu Hakusho) using his Sword of the Darkness Flame to cause his target to burst into black flames upon being slashed.

Makoto Shishio (Rurouni Kenshin) using the serrated edge of his "Mugenjin" to ignite the human flesh and fats that coat his blade to ignite his slashes for fiery damage.
Add a photo to this gallery
Retrieved from "https://powerlisting.fandom.com/wiki/Ignition_Slash?oldid=1373598"
Community content is available under CC-BY-SA unless otherwise noted.