Itachi Uchiha (Naruto) uses "Demonic Illusion: Mirror Heaven and Earth Change" to decrypt Kurenai's genjutsu and use it against her.

The power to reflect Illusions back against users. Sub-power of Illusion Manipulation. Variation of Power Reflection.

The user can reflect any illusion that is used against them and sends it right back to its caster as a means of self-defense and counter-attack. 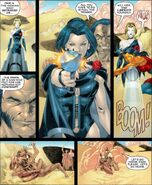 Sage (Marvel Comics) used her mental prowess to reverse Lady Mastermind's psychic illusion back at her.
Add a photo to this gallery
Retrieved from "https://powerlisting.fandom.com/wiki/Illusion_Reflection?oldid=1207859"
Community content is available under CC-BY-SA unless otherwise noted.