The power to replicate and produce the exact same aspects of sources that they are viewed and emulated from. Variation of Power Replication and Illusion Manipulation.

User can create either convincingly realistic faux copies of another individuals abilities which simulate both the natural effects as well as the proper response that accompanies them, confusing the recipient that their power is either being used against them or nullified. As well as erect totally solidified illusions that have actual physical effects upon the material world that which copy every little aspect of said assimilation right down to it's appearance, effect and desired results; all while still remaining a perfectly simulated fabrication. 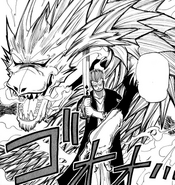 Lance (Rave Master) with Dark Bring Real moment.
Add a photo to this gallery
Retrieved from "https://powerlisting.fandom.com/wiki/Illusory_Power_Replication?oldid=1257263"
Community content is available under CC-BY-SA unless otherwise noted.