Rustyrose (Fairy Tail) demonstrating the power of his Arc of Embodiment.

Bring anything from user's imagination into existence.

"Imagination should be used, not to escape reality, but to create it."
― Colin Wilson

"The most powerful force in this world is "imagination". Anything I imagine, anything at all, becomes reality."
― Gremmy Thoumeaux (Bleach)

The ability to bring anything from one's imagination into existence. Sub-power of Artistic Creation, Subjective Reality and Imagination Manipulation. Variation of Creation.

User can bring any material, being or tool originating from their imagination into existence and literally bring their wildest ideas into reality.

Finn (Adventure Time) suffering snake bites from snakes conjured by Jake's out of control imagination. The snakes, being imagined by Jake, are invisible to everyone but himself. 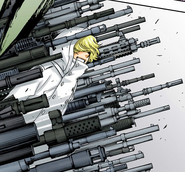 ...and creating a clone to assist him in summoning a meteorite to destroy the Soul Society.

Due to a unique form of mental illness and potent talent in artistry, Alex Nero (DC Comics) wielded his Qwardian Power Ring with unbelievable imagination... 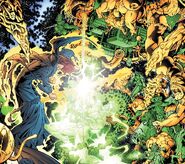 Brain (Skylanders) is able to use Mind Magic, allowing him to create objects from his imagination, and warp reality with his thoughts.

The Medusa Virus (King of Thorns) had the ability to bring thoughts and imagination to life (i.e. this monster was created from a boy's thoughts on his video game)

The Big Head Killer (The Mask) is a living cartoon that can bring anything he imagines into reality.

The Reality Gauntlet (Danny Phantom) can make the wearer's dreams real with The Blue Gem of Fantasy.

Savior (DC Comics) discovered the power to make whatever it is he could imagine reality.
Community content is available under CC-BY-SA unless otherwise noted.