Upon absorbing and assimilating the Creation Equation, Max Faraday (Wildstorm) became the undisputed God of the Wildstorm Universe.

Be granted godhood by the means of a specific supernatural source.

"YES! Yes... I feel it, the power... fills me. Yes, I feel the universe within me! I am... I am a part of the cosmos! The power flows... Flows through me! Of what consequence are you now? This planet, these people. They are NOTHING to me! The universe is power! Real, unstoppable POWER! and I am that force! I am that power! KNEEL BEFORE YOUR MASTER! Fool! you are no longer my EQUAL! I am more than man! MORE THAN LIFE! I... am... GOD!"
― Skeletor (Masters of the Universe: The Movie)

" I have crossed the oceans of time in search of this place where I would fulfill my destiny. ...and this is where my journey ends. This is where I become a god. Welcome to Necrosha"
― Selene Gallio (Marvel Comics)

The circumstance of being granted godhood by the means of a specific supernatural source.

User can gain godhood via contact with or assimilation of a supernatural source or entity. With this event, the user can utilize the virtually limitless power and bring order or chaos to the universe itself.

Father (Fullmetal Alchemist: Brotherhood) was able to absorb God into his body obtaining perfection and godhood.

The Oculus of the Argo (Justice League Action) is an artifact of the Olympian Gods that can imbue a mortal with the power of Zeus,... 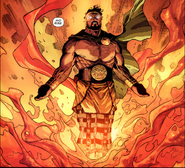 Upon gaining the power from the ingredients of true godhood, Hercules (Marvel Comics) became the veritable All-Father and God of Gods. 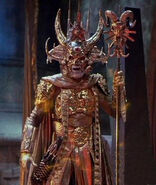 After absorbing the infinite cosmic power of Castle Grayskull, Skeletor (Masters of the Universe: The Movie) was transformed into a god.

Dr. Robotnik (Sonic the Comic) has become a godlike being after absorbing the Chaos Emeralds.

After emptying Purgatory of its souls, Castiel (Supernatural) became a god, surpassing most beings, including Archangels.

Metatron (Supernatural) tried to play God by connecting to the Angel Tablet, acquiring the power of God.

Oracle Ascendant (Valkyrie Crusade) was granted godhood after being clad in the gifts of the gods.

God Scheherazade (Valkyrie Crusade) became a goddess after being worshiped as one.

Murakumo (Valkyrie Crusade) obtained godlike powers through the use of the Serpent Slayer sword and the War Goddess Dress.

With the Reality Gauntlet, Freakshow (Danny Phantom), rose to a godhood power.
Add a photo to this gallery
Retrieved from "https://powerlisting.fandom.com/wiki/Imbued_Godhood?oldid=1769164"
Community content is available under CC-BY-SA unless otherwise noted.