Become impossible to be moved.

The power to be impossible to be moved by an external physical force. Not to be confused with Paralysis Inducement. Opposite to Juggernaut Momentum.

The user can never be moved by an external physical force, but may freely position themselves.

Robocop (Robocop) possesses two rambolts in each foot to anchor him into the ground, immobilizing him with enough force to stop a speeding car. 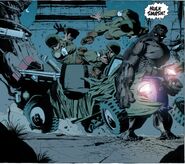 Once he plants his feet on the ground, Bruce Banner/Hulk (Marvel Comics) becomes an unmovable wall.

Superman (DC comics) can enter an immobile state where not even beings of Hulk's strength can move him.
Add a photo to this gallery
Retrieved from "https://powerlisting.fandom.com/wiki/Immobility?oldid=1645409"
Community content is available under CC-BY-SA unless otherwise noted.