The Enchantress (Marvel) is an Asgardian goddess.

Heike (Code: Breaker) claimed that he lived for 100 years, despite still looking like a teenager. 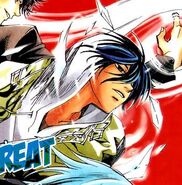 Himuro Gemma (Ninja Scroll) putting his severed body parts back together, even his head is possible, rendering him immortal.

Professor Paradox (Ben 10) due too being outside of time and space.

Nathan Young (MisFits) is a user of this power
Wonder Man.jpeg.jpeg
Because of the ionic energy that empowers him, Wonder Man (Marvel) no longer ages, and is functionally immortal.

Because of the ionic energy that empowers him, Atlas (Marvel) no longer ages and is functionally immortal.

Because of the ionic energy that empowers him, Count Nefaria (Marvel) no longer ages and is functionally immortal.
Add a photo to this gallery
Retrieved from "https://powerlisting.fandom.com/wiki/Immortality?oldid=108819"
Community content is available under CC-BY-SA unless otherwise noted.