The power to manipulate the immune systems of oneself and others. Sub-power of Body Manipulation. Not to be confused with Immunity Manipulation.

The user has complete control over the immune system of oneself and others, allowing them to freely alter and manipulate it. The immune system is a system of biological structures and processes within an organism that protects against disease. In order to function properly, it must detect a wide variety of agents, from viruses to parasitic worms, and distinguish them from the organism's own healthy tissue.

User can weaken the subject's immune system causing them to get various diseases or strengthen it making them immune to diseases. 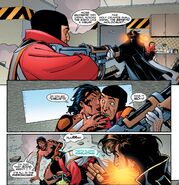