Sebastian Shaw (Marvel Comics) can not only absorb energy, but absorb the impact of bullets and such.

Absorb the impacts of anything.

The power to absorb mechanical and physical impacts. Sub-power of Impact Manipulation and Kinetic Energy Manipulation. Variation of Absorption. Not to be confused with Physical Force Absorption.

The user can absorb a perfectly inelastic collision, an object struck by a projectile will deform, and this deformation will absorb most, or even all, of the force of the collision. They can absorb physical impacts such as punches and kicks, weaponry such as swords, bullets and hammers or even explosions.

Billy Blim (Angel) strikes the ground with enough force to crack it, and absorbs the resulting impact.

Thanks to the Slayer Handbook, D'Hoffryn (Buffy the Vampire Slayer) can absorb the kinetic energy of impacts and redirect them.

Botamo (Dragon Ball Super) absorbs the impact of Goku's attacks and transfers the damage to another dimension.

The Black Panther's (Marvel Comics) Panther Habit suit, being composed of Vibranium, can absorb and redirect the force of impacts, such as bullets. 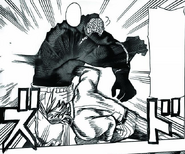 Noumu (My Hero Academia) is able to withstand the strength from All Might's punches due to the Quirk "Shock Absorption".

Impact Dials (One Piece) can absorb kinetic energy, such as impacts, and redirect it.

Adam Taurus's (RWBY) Semblance allows him to absorb impacts with his sword...

...and unleash them as a sword beam.

Po (Kung Fu Panda)
Add a photo to this gallery
Retrieved from "https://powerlisting.fandom.com/wiki/Impact_Absorption?oldid=1762413"
Community content is available under CC-BY-SA unless otherwise noted.