The Silence (Doctor Who) are such incredible users of this ability that they can only be remembered while they are being seen.

The ability to be completely undetectable and imperceptible. Sub-power of Perception Manipulation. Advanced version of Tracking Evasion.

The user is totally imperceptible, and as such can in no way be detected or, in some cases, communicated with by external forces, whether physical, mental, spiritual, technological, etc. As such, they can’t be perceived more potentially even interacted with through smell, touch, vision, hearing, etc. and give off no heat, auras or energy, leaving no evidence of their presence, yet the space they occupy has no lack of it. To all senses, the user does not exist.

The user is undetectable by x-ray scans, sonars, radio detection, any/all technological detection. They cannot be perceived by mental, telepathic or spiritual powers. Some users may not even be able to be remembered or perceived as existing at all.

The Noth (Anima: Beyond Fantasy) are imperceptible to everyone without elevated existential power.

Kaname Tōsen (Bleach) using his Bankai, Suzumushi Tsuishiki: Enma Kōrogi to create an enclosed space where he becomes completely imperceptible to everyone else inside it, so long as they do not make contact with his sword.

Hachigen Ushōda (Bleach) using Hachigyō Sōgai, a double dislocation barrier which erases whatever is within it from existence and removes the space it takes up from an outsider's inner consciousness, making it so one cannot even perceive its presence.

Guenael Lee (Bleach) using his Vanishing Point to cause his own appearance, existence and memory of it to vanish. 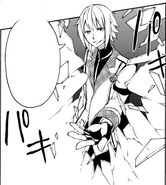 Shizuya Kirihara (A Chivalry of a Failed Knight) can create a flawless stealth camouflage that completely isolates a person's senses.

Maddie (Fables) is a witch skilled in espionage. She is so skilled in fact that she was able to stalk and spy on Mr Dark for weeks without him realizing it.

While Jacob Lessio (Fairy Tail) is invisible, he can negate his own presence to prevent from being detected by sound, scent or even magic power.

Komurasaki (Unbreakable Machine-Doll) has the ability Yaegasumi to hide herself and allies or even alter the perception of the enemy, making her extremely useful in sneaking to enemy fortresses.

SCP-055 - [Unknown] (SCP Foundation) is a "self-keeping secret" or "anti-meme" that is indescribable by anyone once they know what it is
Português do Brasil
Community content is available under CC-BY-SA unless otherwise noted.
Advertisement