Charlotte Katakuri (One Piece) hurling a jellybean like bullet.

"I'm not giving him cake—I'm assaulting him with cake!"
― Pinkie Pie

"Here's a riddle: When is a Croquet Mallet like a billy club? I'll tell you: Whenever you want it to be."
― Cheshire Cat

The ability to use bizarre weaponry with great skill. Variation of Weapon Proficiency.

User can wield bizarre weaponry with great skill. The user can also perform feats, such as bludgeoning their opponents with a book, slicing their flesh with a towel and even find effective, offensive uses for bananas and other edible objects. 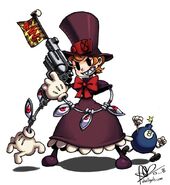 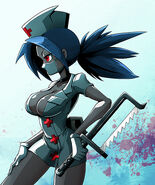 Obito Uchiha (Naruto) using Madara's gunbai in unorthodox, yet effective methods: as a flail and blunt broadsword, as well as a shield.

Cerebella (Skullgirls), the Diamond in the Rough is "armed" with Vice-Versa, a living hat with two strong gigantic arms that she wears on her head. She puts her talent to use by dazzling the crowds at the circus or breaking the legs of enemies of the Medici Mafia.

Alice Liddell (American Mcgee's Alice) can use toys from her childhood as weapons even more so that they are crafted from her own madness.

Bugs Bunny (Looney Tunes) can pull acme weapons out of nowhere and use them with great skill.

Same goes for Scanty and Kneesocks (Panty and Stocking with Garterbelt)

Yukari Yakumo (Touhou Project) can open gaps in space to unleash a variety of amazingly strange weaponry, and she can use her umbrella as a weapon as well.

The Joker (DC Comics) can employ a variety of joke and gag themed weaponry.

...as well as her party cannon.

Kyoya Hibari (Katekyō Hitman Reborn!) can wield both his tonfa...

Due to his immense strength, Hulk (Marvel Comics) is skilled in using larger objects, such as vehicles, as weapons.

Haji (Blood+) uses a cello case as an offensive/defensive weapon to deadly effect.

Ratchet (Ratchet & Clank) uses a wrench as a melee weapon to great effect.

Genis Saga (Tales of Symphonia) wields a Kendama/Ball In a Cup as a weapon in battle.

Inklings (Splatoon) can use all weapons available to them, all of which are improbable ink-based weapons, with proficiency.

DJ Octavio can use octorpedoes, rocket fists, the Octarian equivalent of the Killer Wail...

...and octomissiles, all of which are improbable ink-based weapons, with proficiency.

Frank Martin (Transporter 3) defeating his opponent with a fire hose.

Shizuo Heiwajima (Durarara!) using a street sign as a weapon

Tsutsuji Amedome (Vanilla Spider) wields a Faucet as the ultimate weapon against man-eating aliens known as the Elevators .