The power to destroy an entire object or person with extreme heat. Combination of Destruction and Heat Manipulation. Variation of Disintegration.

The user can utilize high temperatures to instantly incinerate almost anything, reducing it to ashes. High-level users can control what part of the target they want to incinerate, and destroy the target so completely that absolutely no byproduct is left, not even ashes.

The True Fire of Samahdi (Boruto: Naruto Next Generation) burns with such fierceness that it can overwhelm even regeneration.

Zanka no Tachi, Higashi: Kyokujitsujin blows away any and all that touches the blade's edge to nothingness.

Zanka no Tachi, Nishi: Zanjitsu Gokui incinerates any and all attacks that comes in contact with the fire armor into nothingness.

Zanka no Tachi, Kita: Tenchi Kaijin incinerates all into nothingness by sending out a slash of flames and heat. 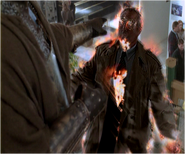 The Judge (Buffy the Vampire Slayer) is able to incinerate any being with "humanity," more specifically an emotional capacity; only truly evil beings are immune. 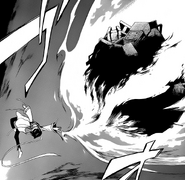 The Black Flames of Amaterasu (Naruto) can burn down an entire village or forest in a matter of minutes. 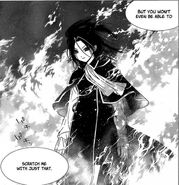 The Salamander summoned by Huang Feihong (Rosario + Vampire) is strong enough to reduce all its enemies to ashes (Akua is evading it at another dimension).

Ra's (Yu-Gi Yo) God Phoenix mode will incinerate all of its enemies, even a fellow God, to ashes.

The Phoenix Force (Marvel Comics) can utilize Cosmic Flames to completely incinerate anything, not even leaving ashes.

Fiendfyre (Harry Potter) is such potent cursed fire, it can reduce anything it touches to ashes and evaporate water.

Shinichiro Ōtori (The Qwaser of Stigmata) igniting the sodium within Jackal, incinerating him.

Cthugha (Valkyrie Crusade) can incinerate anything.

Orb can send his Guardian ÄRM, Phoenix (Marchen Awakens Romance) to burn his enemies into ashes.

As a demon with the element of fire, Guardian ÄRM, Kikazoku Fire (Marchen Awakens Romance) can incinerate enemies with a single touch.

While using his Diable Jambe technique, Sanji (One Piece) was able to burn a Kraken with a blazing flames while underwater.

Franky's (One Piece) Radical Beam!!! is a powerful laser that can incinerate anything in its path and can easily melt steel.

Caesar Clown's (One Piece) Blue Sword can incinerate his own lab into a sea of flames and ash with a mere swing.

Sabo's (One Piece) flames can incinerates his enemies.

With his Jagan Eye, Hiei (Yu Yu Hakusho) can call upon flames from the pits of the Spirit World to incinerate anything in its path.