After his Double Awakening, Sung Jin-Woo (Solo Leveling) became a Player and is able to grow stronger by leveling up and distributing status points to his various stats as the "System" assists in his growth.

Users of this power have a special "game-like system" that can give special abilities, attacks, and/or boosts to the normal abilities of the users. 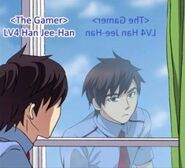 Han Jee-Han (The Gamer)
Add a photo to this gallery
Retrieved from "https://powerlisting.fandom.com/wiki/Independent_Growing_Booster?oldid=1546118"
Community content is available under CC-BY-SA unless otherwise noted.