Both Saxa and Gannicus (Spartacus) are known to be very sexual driven, especially for women and each other that they equal/rival each other in bed.

"Love is a kind of symptom that arises through the repression of libido."
― Frank Tallis

Users have an inexhaustible libido and very powerful sexual desire/drive that can act as an unending source of power for their abilities, users never get bored of sex or lose the mood for sexual activity and passion. The libido can be a psychic drive and/or energy, particularly associated with pure sexuality, but also present in other instinctive desires and drives.

Unlike Indomitable Lust, users don’t necessarily have a dark and intense desire to take people as their own or any need completely dominant and possessive over them which can lead to rape or even murder, the darkest and evil vices, users just have a need for sexual desires and passion that are completely super/natural they users never have to involves dark and perverse desires ever.

Devils like Akira (Devilman Crybaby) have a more enhanced sexuality.

... she even feeds of sexual energy for sustainment...

... and draw out anyone's sexual desires by touch.

Phoebe (Charmed) even before she was a Goddess of Love, she was always the most sexually active member of her family. 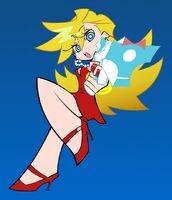 Panty Anarchy (Panty and Stocking with Garterbelt) derives her power from her incredible libido.

Aphrodite/Venus (Greco-Roman Mythology) as the goddess of love and sexuality she had always slept with anyone she desires even the gods of her pantheons.

Azazel (Highschool DxD) became one of the first Fallen Angels due to his indomitable libido, having formed hundreds of harems over the millennia after he first had sex with a human woman.

Issei Hyoudo (High School DxD) possess tremendous sexual desires even before he became a devil, he's even empowered just by thinking about breasts.
Add a photo to this gallery

GINGER PANTHER AND THE GEARS OF THE RISING SUN - SOCIETY OF VIRTUE
Add a photo to this gallery
Retrieved from "https://powerlisting.fandom.com/wiki/Indomitable_Libido?oldid=1740570"
Community content is available under CC-BY-SA unless otherwise noted.