Bell Cranel (DanMachi) held an extremely powerful and pure love towards Aiz Wallenstein, that he developed the Liaris Freese skill which renders him immune to seduction charms of the Goddesses of Love.

"Kurosaki-kun, even if I were to die five times, reborn through five different lifetimes, I will still love the same person."
― Orihime admitting her love to Ichigo, (Bleach)

"Love, is that the thing that makes him so strong?"
― Gaara wondering the source of Naruto's strength (Naruto)

"Look at her. I would die for her. I would kill for her. Either way, what bliss."
― Gomez expressing his love for Morticia (The Addams Family)

"For hearts long lost and full of fright,
For those alone in Blackest Night.
Accept our ring and join our fight,
Love conquers all with violet light!"
― Star Sapphire Corps Oath (DC Comics)

"No matter what you do from here on out, know this…I will love you always."
― Itachi Uchiha to his little brother, Sasuke (Naruto)

"The bond between Nezuko and me…can’t be…severed by anyone!!"
― Kamado Tanjirou to Rui (Kimetsu no Yaiba)

The ability to possess unnaturally strong love. Sub-power of Omnibenevolence. Variation of Indomitable Emotions. Opposite to Indomitable Rage. Not to be confused with Indomitable Lust.

Users have unnaturally strong love, enabling them to overcome any and all obstacles in existence love itself can overcome, including death, fate, etc. Through their love the user can face anything regardless of how painful or how traumatic the outcome of something can be, no matter how intense the hardship is the user will over come it. Love is the most powerful emotion, capable of feats never thought possible by making the user determined to never give up on that which they love most.

Orihime Inoue (Bleach) has pure, unconditional love for Ichigo Kurosaki which is so strong she emphasized his feelings of anguish, disappointment, or worry, even feeling pain herself when she sees Ichigo getting hurt.

Legend says that Jesus Christ’s (Christianity) love for mankind proved to be so great that even when he was being crucified by those who hated him, he begged his father (God) to forgive them for their lack of moral awareness and ignorance, proving himself to be a better man than most.

Kurumi Tokisaki (Date A Live) loved Shido extremely dearly, to the point she time-traveled countless times desperately to saved him from inevitable death.

Star Sapphires (DC Comics) are given strength by love.

Akira (Devilman Crybaby) despite having the body and power of a devil his heart is still human capable of unconditional love.

According to Charles Deveaux, Peter Petrelli (Heroes) has the power to love unconditionally which proves to be his greatest power yet.

Will Scarlet's (Once Upon a Time in Wonderland) love for Anastasia was so strong and true that he could break Jafar's love spell.

Itachi Uchiha (Naruto) was one of Leaf/Konoha's greatest patriots who love his brother greatly.

Severus Snape (Harry Potter) held everlasting love towards Lily Evans even after her death, until the day he dies. 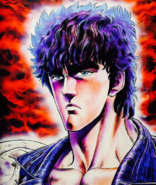 Purple Raven (Teen Titans series)
Add a photo to this gallery
Retrieved from "https://powerlisting.fandom.com/wiki/Indomitable_Love?oldid=1417593"
Community content is available under CC-BY-SA unless otherwise noted.