Pride (Fullmetal Alchemist: Brotherhood) is the living embodiment of Father's pride, and serves as the pinnacle of the Homunculi's homunculus-centric beliefs and contempt of humans. He loves the honor of being a Homunculus the most, and encourages his siblings to feel contempt towards all non-homunculi.

"Is that supposed to be insulting? You say I'm arrogant, I say damn right! That's pride! Pride in the Saiyan I am!"
― Vegeta (Dragon Ball series)

"You may have invaded my mind and my body, but there's one thing a Saiyan always keeps...his PRIDE!"
― Vegeta (Dragon Ball series)

"I'll lose my pride if I flee from them. I Am a King!! My only goal is to remain at the top!! If I flee now, my pride will be lost!! There is...No next time."
― Diavolo (JoJo's Bizarre Adventure Part V/5: Golden Wind/Vento Aureo)

"Devils are! No! We, the Maou, are the ones who have to become the Kings of the World! By using Ophis’s power we will destroy the world, and create a new World of devils! For that, you impostorous Maou are in our way!"
― Creuserey Asmodeus (Highschool DxD)

"How arrogant. That's precisely who I am. The Sin of Arrogance, Lion's Sin Escanor."
― Estarossa and Escanor (Seven Deadly Sins)

Vegeta (Dragon Ball series) possesses overwhelmingly powerful pride as a Saiyan, to the extent of allowing him to break free of Babidi's mind control, something that Babidi claims has never happened before. 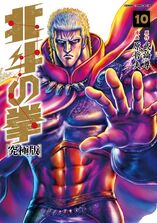 Raoh (Fist of the North Star)

Seto Kaiba's (Yu-Gi-Oh!) pride proved so great that it once triggered the Millenium Rod to gain a vision and change his future, but it also proved his greatest fault because he arrogantly denies the facts in front of him.
Add a photo to this gallery
Retrieved from "https://powerlisting.fandom.com/wiki/Indomitable_Pride?oldid=1605931"
Community content is available under CC-BY-SA unless otherwise noted.