Malphite, Shard of the Monolith’s (League of Legends) Unstoppable Force turns him into a raging juggernaut.

The power to use inertia-based magic. Form of Magic. Variation of Inertia Manipulation.

User can utilize magic/spells that are based on and/or take control of inertia, allowing them to perform magical feats such as making stationary objects immobile and/or moving objects unstoppable.

Braum, the Heart of the Freljord (League of Legends)

Olaf, the Berserker (League of Legends)

Xin Zhao, The Seneschal of Demacia (League of Legends) 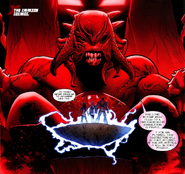 Cyttorak (Marvel Comics) the Destroyer, Lord of Oblivion, Master of the Raging Storm.
Add a photo to this gallery
Retrieved from "https://powerlisting.fandom.com/wiki/Inertia_Magic?oldid=1433006"
Community content is available under CC-BY-SA unless otherwise noted.