M'nagalah (DC Comics), a cancer god, infects his victims with an unknown level of cancerous organisms.

The power to infect others. Sub-power of Disease Manipulation.

The user can infect others with different substances. These can range from harmless invading bodies such as nanites to toxic, lethal substances such as poisons.

Winifred Burkle (Angel) was infected by the essence of Illyria, who converted her body into its vessel. 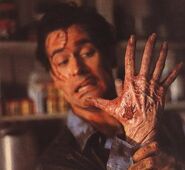 After he was bitten by the Deadite form of his girlfriend, Ash Williams' (Evil Dead) right hand was infected and possessed by them.

After their blood mixed with her own, Buffy Summers (Buffy the Vampire Slayer) was infected with an aspect of the telepath demons...

The Devastator (DC Comics) has been infected with the Doomsday Virus, which he can spread to other beings. 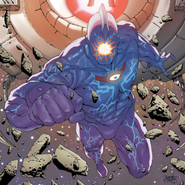 OMACs (DC Comics) are all infected with an OMAC virus that they can spread to others.

Herrscher of the Corruption (Honkai Impact 3rd) is a virus that can infect all kinds of organisms and turn them into zombies as well as forms of technology and control them.

Carnage (Marvel Comics) can infect others with a portion of his symbiote.

Cable (Marvel Comics) was infected with a techno-organic virus by Apocalypse.

The Xgardians (Marvel vs. Capcom: Infinite) are Asgardians that have been infected with the Sigma Virus.

Jack (Samurai Jack) was infected by Aku's essence, turning him into a clone of the demon.

Chloe Sullivan (Smallville) has been infected by Brainiac.
Add a photo to this gallery
Retrieved from "https://powerlisting.fandom.com/wiki/Infection?oldid=1733232"
Community content is available under CC-BY-SA unless otherwise noted.