Eve (Supernatural) bites Dean Winchester to infect him and turn him into a Jefferson Starship.

Spread viruses and diseases through bites.

The ability to spread viruses and diseases through bites. Variation of Infection.

The user's teeth and/or saliva contain different substances that they can spread to others through their bite. These can range from harmless invading bodies such as nanites to toxic, lethal substances such as poisons.

Traditional werewolves (Various) can spread the werewolf condition to other beings with their bite.

Vampires (Various) can transmit the vampire condition other beings with their bite. 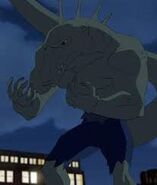 After being injected with a refined Lizard serum, the Lizard (Ultimate Spider-Man) could infect others with his bite...

...with the resulting Lizard Virus transforming those bitten into Lizards.

Rakghouls (Star Wars Legends) can infect other creatures with the Rakghoul Plague either by biting or scratching them, converting them into even more Rakghouls.

SCP-1783 - Cardboard Cutout Dog (SCP Foundation) is capable of infecting humans with a bacteria that can transform them into cardboard cutouts by biting them.

The Rat King's (Teenage Mutant Ninja Turtles 2012) intended race of rat people possess an infectious bite, allowing them to convert humans into more rat people.
Add a photo to this gallery
Retrieved from "https://powerlisting.fandom.com/wiki/Infectious_Bite?oldid=1578473"
Community content is available under CC-BY-SA unless otherwise noted.