The Cordyceps Brain Infection (The Last of Us) is a parasitic fungus affliction which seeds into the infected host turning them into hideous monstrosities over time.

User can create parasitic/symbiotic spores which infect targets and have various effects on them.

The Grey (DC Comics) Is the primordial force for all Mycorrhizae in the universe, the molds, spores and fungal life it produces can afflict higher forms of life...

Fungas (Final Fantasy Unlimited) is an extra-dimensional entity with the ability to regenerate and reform himself indefinitely. While within his home dimension the spores acted on his behalf, even infecting his enemies with a lethal poison. 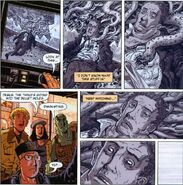 ...turning them into frog monsters.

The Klyntar (Marvel Comics) are a form of fungal life which bond to a host a a sub-cellular level.

Even while fossilized, The Plagas (Resident Evil 4) still live on in microscopic spore form...

...a statement which is proven when miners were exposed to their offspring and became new hosts for them. As noted in Luis Sera's notes.

E-001, a.k.a. Eveline (Resident Evil 7: biohazard) is an E-Type who can manipulate mutagenic mold to mutate and corrupt victims.
Add a photo to this gallery
Retrieved from "https://powerlisting.fandom.com/wiki/Infestant_Spores?oldid=1416623"
Community content is available under CC-BY-SA unless otherwise noted.