"Rancid Meat Attack! Stupid Parasites! Is there no way I can find justice?"
― Homer Simpson (The Simpsons)

One of Szayelaporro Granz's (Bleach) many parasitic powers is the ability to infect other beings upon his death, causing him to literally be reborn out of their bodies.

Zerg (StarCraft) are the most common users of this power.

A Facehugger (Aliens/Aliens vs. Predator) infesting a human with a Xenomorph embryo…

…which erupts from the host as a Chestburster.

Infestors (Starcraft) are capable of infesting Terran buildings and Terran Units as well.

A man (Resident Evil) being orally infested by a Type 2 Plaga. 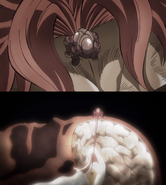 The Drowned (DC Comics) possesses the ability to infest any water to make it hers, and even convert anyone into her Dead Water Sea creature servants.
Add a photo to this gallery
Retrieved from "https://powerlisting.fandom.com/wiki/Infestation?oldid=1540513"
Community content is available under CC-BY-SA unless otherwise noted.