The user is not only immune to parasitic infection, but can also reject infestation by parasites and evict them from their bodies. Alternatively, they can also expel parasitic entities from the bodies of others.

In some cases, the user's body is in itself harmful to any parasite who tries to infect them, causing them pain and killing them outright.

When possessed by Baby, Trunks (Dragon Ball GT) was not only able to resist the control of the Tuffle parasite...

...but expel him from his body.

Thanks to his complete control over his body, Majin Buu (Dragon Ball series) is not only immune to Baby's Tuffle parasite eggs...

...but was able to expel one from his body.

Eddie Brock/Anti-Venom's (Marvel Comics) skin is caustic to the Venom symbiote, allowing him to reject its attempts to bond with him again. 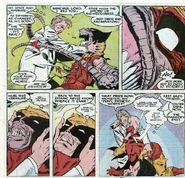 Wolverine's (Marvel Comics) healing factor enables him to expel a Brood egg from his body.

After being treated by the Metroid vaccine, Samus Aran (Metroid Fusion) gained the ability to reject X-Parasite infection, absorbing them by physical contact.

...to help Karai overcome her brain worm infection, allowing her to expel the creature.
Add a photo to this gallery
Retrieved from "https://powerlisting.fandom.com/wiki/Infestation_Rejection?oldid=1457191"
Community content is available under CC-BY-SA unless otherwise noted.