Have infinite energy.
The ability to have an unlimited amount of energy. Variation of Infinite Supply.

The user possesses an unlimited energy source that will never run out, allowing them to use attacks and accomplish other feats that require energy indefinitely. The source can supply any form of energy, such as electrical, kinetic energy, etc, which can provide power to a physical body, technology, etc. Different types of energy has different affects the users, for example life energy, which effectively grants the user unlimited regenerative power and eternal youth.

Priscilla (Claymore) possesses an infinite amount of demonic life energy, which grants her transfinite stamina and the ability to regenerate from all wounds instantly, which combined to her lack of weak points makes her nigh-indestructible. 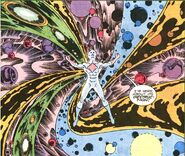 Android #18 (Dragon Ball) possesses an infinite energy supply, allowing her to fight indefinitely without ever tiring.

The Chaos Emeralds (Sonic the Hedgehog) are objects of great and mysterious power: just one of them is powerful enough to power a machine at infinite scales (if not overload some) and all seven could destroy the Earth.
MasterEmeraldRunners.png
The Master Emerald (Sonic the Hedgehog)

The Legendary Silver Crystal (Sailor Moon)
Add a photo to this gallery
Retrieved from "https://powerlisting.fandom.com/wiki/Infinite_Energy?oldid=1279869"
Community content is available under CC-BY-SA unless otherwise noted.