Control and manipulate ink at will

The power to manipulate ink.

It is the ability to control and manipulate ink at will. This includes moving ink, inducing ink production within subjects capable of such, using it to write/alter messages or images into documents, tattoos, etc. Users can mold ink into a variety of shapes and forms and create makeshift weapons to attack or defend. 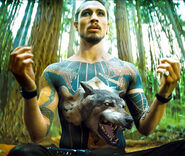 Tudo Sukoto/Tattoo(Marvel Movie: Electra) reanimating his body art.
Add a photo to this gallery
Retrieved from "https://powerlisting.fandom.com/wiki/Ink_Manipulation?oldid=307818"
Community content is available under CC-BY-SA unless otherwise noted.