The user can harness the power of their inner demons to gain the strength and ferocity to destroy anything in their path. Although, the user mustn't let their inner beast overpower them or they will become psychotic killing machines bent on survival and bloodlust. The user must be careful and try to stay calm unless they really need to unlock the beast inside them. The user also takes on the aspects of wild, dangerous, and diseased animals that are insane and almost nothing can stop them. 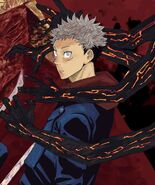 ...the demonic shaman known as Ryomen Sukuna, the King of Curses.

The Voice (Marvel/MAX Comics) goaded Frank Castle towards making a deal that would save his life...

...Demon Eyes Kyo, one of the most feared samurai in the world.
Add a photo to this gallery
Retrieved from "https://powerlisting.fandom.com/wiki/Inner_Beast?oldid=1391118"
Community content is available under CC-BY-SA unless otherwise noted.