"For years, I've been treating the Hulk like he's some kind of disease... something to get rid of. But then, I start looking at him as the cure. Eighteen months in the gamma lab. I put the brains and the brawn together... and now, look at me. Best of both worlds."
― Bruce Banner/Hulk (Avengers: Endgame)

The power to have mastery over ones inner demon/beast. Advanced version of Inner Beast Manipulation. Technique of Personal Mastery.

The user has full and complete mastery/control over their inner/personal demons/beasts giving them use of their full powers for their own. User can not only capable of collaborating with their inner beasts but can also manipulate them to any and all extents; magical, mental, energetic, etc, making users extremely powerful and very dangerous beings in their respective worlds.

Users' inner demon/beast can be used as a source of raw power and manipulate it and their inner monster however they see fit for any situation need from; summon, synchronize, transform, manifest them and so on, giving users numerous abilities to use in their time of need. Depending on the nature of the inner beast users can have different abilities based on the monster they have within themselves in any potential way they can.

Their mastery over their inner demon/beasts makes them fundamentally bound to the users giving them a form of symbiotic bond to them internally or remotely allowing instant synchronization to access all their powers with and without their innate berserk nature with total tranquility having mastered their ferocious characteristic which they can use to their advantages.

The binding nature users and their beast have anchors them completely making users unable to never fall victim to any unwanted loss of control or be controlled by any other foreign enemies/forces, even if their inner beasts should even have their own physical bodies outside the user, they are still under their absolute control and command.

While traversing the multiverse, Willow Rosenberg (Buffy the Vampire Slayer) confronted her dark side and recognized it as a part of herself rather than a completely separate entity... 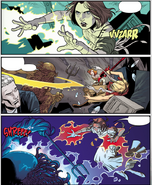 ...which allowed her to switch between both white and dark magic without fear of losing control.

While he had his tail, Vegeta (Dragon Ball Z) mastered his Great Ape form, retaining his intelligence and speech capabilities, as well as his speed and power to fly.

At first Bruce Banner (Marvel Cinematic Universe) relied on his constant controlled fury to freely shift into the Hulk...

... until he spent eighteen months in a gamma lab to master the Hulk within him, resulting in a new persona that combined the Hulk's raw strength and physique with Banner's mind and intelligence.

Jackie Estacado (Top Cow) as the host of the Darkness within himself he needed to master his powers and demons to truly control them.
Add a photo to this gallery
Retrieved from "https://powerlisting.fandom.com/wiki/Inner_Beast_Mastery?oldid=1504125"
Community content is available under CC-BY-SA unless otherwise noted.