The power to transform into/with your inner beast. Sub-power to Inner Beast.

Users can become/fuse with their inner beast, gaining new or enhanced powers that transcend beyond their natural limits due to the nature they inherit from them.

When in this transformed state, users may be at a standstill between them and their beast which can lead to exchanging or relinquishing control of their body or even emulating a fused personality.

Guts' Beast of Darkness (Berserk) manifesting itself through the Berserker Armor.

Yuji Itadori (JuJutsu Kaisen) taking on a pseudo-like form of Ryomen Sukuna, the King of Curses.

Bruce Banner (Marvel Comics) turning into the world's greatest and strongest being, the Incredible Hulk.

While in human form, Pappy Banner (Marvel Comics) could use the Hulk's superhuman strength and healing factor.

While using the chakra of Nine-Tails, Naruto Uzumaki (Naruto) takes on the fox-like traits. 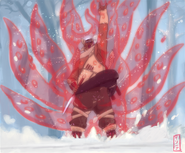 As a Jinchūriki, Killer B (Naruto) can transform into the very beast that's sealed inside him.
Community content is available under CC-BY-SA unless otherwise noted.