"The wise seek power within themselves. The foolish seek it within others. Until you harness the power within yourself, I cannot teach you."
― Jackie Chan

The ability to release a hidden power inside oneself and amplify it in order to become stronger.

The user is able to push their hidden strength within themselves and amplify it, gaining much untold power due to their incredibly strong force of will. Users will be able to bypass all limitations they've possessed on their offensive and defensive capabilities along with their overall abilities, increasing them to the fullest extent, whether it be from the heart, mind, soul, etc.

As it was his inner power that allowed it, Son Gohan (Dragon Ball Z) was able to achieve the level of Super Saiyan 2.

Gon Freecss (Hunter X Hunter) released all his inner power out of anger and guilt.

Naruto Uzumaki (Naruto) releasing his full power together with Kurama. 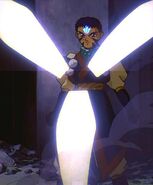 By using his own power rather than his sword, Tenchi-ken, Tenchi Masaki (Tenchi Muyo! Ryo-Ohki), is able to generate the Light Hawk Wings,pure energy constructs and source of tremendous power that are the universe's manifestations of energy from a higher plane of existence.

Yusuke Urameshi (Yu Yu Hakusho)
Add a photo to this gallery
Retrieved from "https://powerlisting.fandom.com/wiki/Inner_Power?oldid=1430118"
Community content is available under CC-BY-SA unless otherwise noted.