By reading his own ki, Asta (Black Clover) was able to sense the Anti-Magic in his body and increase it, unlocking his Black Form transformation.

User can read/view the complete status of themselves, allowing them to see any/all powers/skills, stats, level, overall health, flaws, etc. they possess. This can allow the user to uncover such things as their inner selves, being and hidden potential/talents.

Aang (Avatar: The Last Airbender/The Legend of Korra) used his chakras to perceive his inner being (Raava) in the form of his Avatar State, allowing him to access the form at will.

Tōshirō Hitsugaya and Ikkaku Madarame (Bleach) performing Sword Zen to communicate with their inner selves, allowing them to learn and read their true potential from their Zanpakutō Spirit.

Ichigo Kurosaki (Bleach) performing Sword Zen to communicate with his inner self...

...allowing him to learn and read his true potential from his Zanpakutō Spirit...

...and unlock the Final Getsuga Tensho. 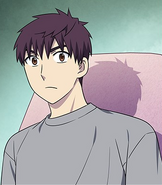 Han Jihan's (The Gamer) Video Game Mechanics also allow him to open up a window... 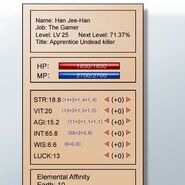 Through meditation and training, Naruto Uzumaki (Naruto) learned to communicate with his inner beast Kurama, eventually earning his companionship and drawing upon his power without fear of losing control.

Thanks to the System, Sung Jin-Woo (Solo Leveling) can read his own status, including his name, class, Health Points (HP), Mana Points (MP), level,...

...allowing him to discover the Rat King plaguing his mind.
Add a photo to this gallery
Retrieved from "https://powerlisting.fandom.com/wiki/Inner_Reading?oldid=1745252"
Community content is available under CC-BY-SA unless otherwise noted.