Son Goku (Dragon Ball Series) learned most of his techniques, such as the Kamehameha Wave, after seeing them performed by others only once.

Gather and understand any knowledge instantly.

The ability to instantly gather and understand any knowledge via supernatural means. Advanced variation of Intuitive Aptitude.

The user can gather and assimilate any kind of knowledge and understand it fully and instantaneously, this can happen in two ways:

Passively: when the user reads, sees or hears any concept they will understand it completely, whether it is natural or supernatural. If the user comes into contact with any piece of “information” that is wrong, they intuitively know this and can discern what is correct and what is wrong.

Actively: when the user wants information/knowledge they acquire it instantly and use it perfectly, e.g. the user can gain the skills and knowledge of a doctor to heal someone or gain the experience and skills of a master martial artist for fighting.

Kiyi (Avatar: The Last Airbender) was able to learn Firebending after witnessing Zuko's techniques and emulating them.

Kazuo Kiriyama (Battle Royale) can instantly learn and master something due to his brain damage erasing all emotions, leading him to the projected winner of the program, barring unforeseen circumstances.

Honoka (Dead or Alive 5: Last Round) can learn any fighting technique she sees, a power she has adapted into her own personal fighting style, Honoka Fu.

Majin Buu (Dragon Ball Z) learned how to use the Kamehameha Wave after seeing Goku perform it.

Practitoners of Hokuto Shin Ken/Big Dipper God Fist (Fist of the North Star) can instantly learn and mimic the techniques of martial artists just by witnessing them.

Born from prehistoric era, the Pillar Men (JoJo's Bizarre Adventure Part II Battle Tendency) instantly learn and comprehend anything, as shown when they woke in the modern era.

Sakura (Street Fighter) learned and copied instantly all of Ryu and Ken's techniques after seeing them once, including learning and mastering the real Hadoken after seeing Dan's fake one. 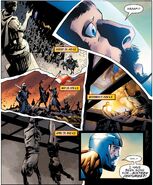 Rando (Yu Yu Hakusho) learned how to use the Spirit Gun after seeing Yusuke Urameshi perform it once.
Add a photo to this gallery
Retrieved from "https://powerlisting.fandom.com/wiki/Instant_Learning?oldid=1636010"
Community content is available under CC-BY-SA unless otherwise noted.