"There's nothing you can do but wait until Beach Boy's hook crawls up your arm and snags your heart!!"
― Pesci to Bruno Bucciarati (JoJo's Bizarre Adventure Part 5: Golden Wind/Vento Aureo)

The power to fuse physical combat with intangibility. Technique of Intangibility. Variation of Combat Merging.

The user is able to incorporate intangibility into any form of physical combat. This can give them an advantage by allowing them to bypass enemy defenses. 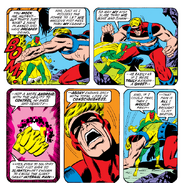 Obito (Naruto) incorporates his intangibility into his fighting style to trick enemies into attacking him, before striking at the right moment.

Mirio Togata's Quirk, Permeation (My Hero Academia) allows him to become intangible and travel through matter. He utilizes this in combat by phasing into walls/floors and popping out at random locations to surprise the enemy.

D.L. Hawkins (Heroes) killing Daniel Linderman by phasing his hand through his skull.
Add a photo to this gallery
Retrieved from "https://powerlisting.fandom.com/wiki/Intangibility_Combat?oldid=1619096"
Community content is available under CC-BY-SA unless otherwise noted.