After learning from and training with Hyogoro of the Flower in the principle of "Ryuo," an advanced application of Busoshoku Haki, Monkey D. Luffy (One Piece) can use it to emit his Haki to cause internal destruction.

"This operation will destroy you from the inside out! Death God Surgery: Gamma Knife!!!"
― Trafalgar D. Water Law to Donquixote Doflamingo (One Piece)

The ability to inflict internal injuries. Sub-power of Mutilation and Wound Inducement.

The user can inflict internal injuries, such as rupturing internal organs, on target. This may not leave any outward sign of damage with the exception of blood coming from the orifices. This allows the user to damage targets who are invulnerable to external physical damage.

Szayel Aporro Granz (Bleach) can cause internal organ damage to enemies by breaking the organ toys of Voodoo dolls.

The effects of Shihoko Kishida's (Darker than Black) ability.

Bell Cranel (DanMachi) channeled Firebolt spell into Hestia Knife after stabbing a Minotaur which violently incinerated the internal organs of its body. 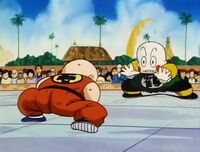 Oboro (Gintama) using Hakkei to strike Gintoki's pressure points, causing a disruption of the meridian flow and his leg to burst from the inside.

Kurapika's Judgment Chain(Hunter X Hunter) if opponents break the rules, the Stake of Retribution will piece the their hearts, killing them instantly.

Usopp (One Piece) using a Impact Dial on Luffy causing internal damage even though his made of rubber.

Wyper (One Piece) using a Reject Dial on Shura hitting him with 10x more the power of an ordinary Impact Dial.

Those who have advanced their Busoshoku/Armament Haki (One Piece) from emitting their Haki without using a medium can send it inside of their target to destroy them from the inside-out. 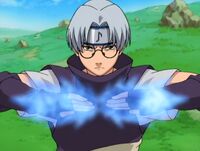 Kabuto Yakushi's Chakra Scalpel (Naruto) can cause internal cuts onto his victims.

...or destroy a person's limb. 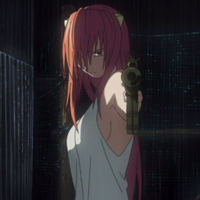 Diclonii such as Lucy (Elfen Lied) are able to cause precise internal injuries, such as heart attacks or collapsing blood vessels, through careful focus and precision of their vectors...

...Mariko demonstrating as she causes Doctor Saito to explode from the inside.

Muromi (Muromi-san) can break all the bones of anyone from the inside out just by placing her hand on their chest....

...demonstrating by breaking all of an animals bones from the inside.

As a master of chi, Hou Ken (Kingdom) could send his chi into an opponent's abdomen to rupture or destroy their organs.

Judge Death's (2000 AD) preferred method of killing is phasing his hand into a victim's chest and crushing their heart.

Superman (DC Comics) is able to perform such feats as lobotomizing others without leaving an external mark through careful focus of heat vision.

Using his heat vision and x-ray vision, Clark Kent/Kal-El/Superman (Superman vs. the Elite) destroys the anomaly in Manchester Black's brain that grants him his powers.

Kitty Pryde (Marvel Comics) defeats the Absorbing Man by phasing into his head and snapping her fingers, triggering a brain concussion.

Thanks to her mastery, Susan Richards/Invisible Woman (Marvel Comics) can create invisible constructs inside her opponents' bodies, damaging their organs.

Dark Danny/Dan Phantom (Danny Phantom) was able to use his Ghostly Wail to destroy Amity Park’s future Ghost Shield from the inside while he was outside of it.

Eligos (Ash vs. Evil Dead) psychically attacks Ash's internal organs, doing such things as damaging his brain's neurons and constricting every muscle and blood vessel in his body.

The "Hands of Blue" (Firefly) use a special sonic weapon...

...to liquefy a victim's internal organs, causing blood from every orifice. 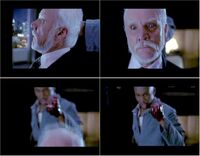 D.L. Hawkins (Heroes) kills Daniel Linderman by phasing his hand into his head and destroying his brain.

...to crush a Valkyrie's heart.

The Leprechaun (Leprechaun series) can use his magic to make a victim's heart or insides explode from the inside out.

An Angel's Smite (Supernatural) can destroy and liquefy the insides of their victims.

Alice (Resident Evil) psychically killing a man by crushing his brain, causing blood from every orifice.

Skarlet (Mortal Kombat 11) rapidly transfuses her blood into an opponent's heart, causing it to explode.
Community content is available under CC-BY-SA unless otherwise noted.
Advertisement