Use the traits of Inugami.

Power to use the abilities of Inugami. Variation of Yokai Physiology and Canine Physiology.

User with this ability either is or can transform into an Inugami (dog god) a zoomorphic or anthropomorphic, dog-like being, often similar to werewolves that are masters of black magic.

Inugami can be conjured due to a complex and cruel ceremony: A common pet dog must be buried up to his neck, only the head remains free. Then a bowl with food or water must be placed close but in unreachable distance before the snout of the dog. Several days after that, when the dog is about to perish and tortured by hallucinations, his head must be severed and buried beneath a noisy street. After a certain time, head and body must be placed in a well-prepared shrine. Now an Inugami can be evoked.

Similar to Shikigami, Inugami are evoked for criminal activities, such as murdering, kidnapping and mutilation of the victims. If the evoker is perfectly trained, they can order his Inugami to possess humans and manipulate them. The victim is often forced to kill itself or other peoples, or to act like being lunatic. But Inugami are also said to be very dangerous for the evoker: since the Inugami´s soul is blinded by its desire for revenge and its unstoppable rage, the Inugami can quickly escape the master´s control and kill their own evoker.

The Longinus Canis Lykaon (Highschool DxD) takes the form of an Inugami. 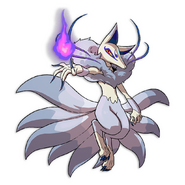 Frostail (Yo-Kai Watch)
Add a photo to this gallery
Retrieved from "https://powerlisting.fandom.com/wiki/Inugami_Physiology?oldid=1665581"
Community content is available under CC-BY-SA unless otherwise noted.