Seija Kijin (Touhou Project) is able to turn over anything into its opposite existence, inverting it. A power she was going to display in full by flipping the hierarchy of power in Gensokyo.

Invert anything.
The ability to invert all things.

The user is able to invert anything, flipping its state to its opposite, or reversing it. This can be anything physical, spiritual, mental, existential, conceptual, metaphysical, axiomatic, and so on.

As examples, the user could invert directions, the order of a hierarchy, the pull of gravity, the flow of electricity or a fluid, logic; such as turning 1 into -1, or even negate axioms by inverting that which is self-evidently true into disproving itself. Inversion can also take the form of the mathematical inversion, 1/x, allowing the user decrease and increase any quantity or value by taking the inverse of it. 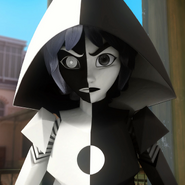 Marc Anciel/Reverser (Miraculous: Tales of Ladybug & Cat Noir) has to power to reverse any aspect of anyone his paper planes touch.
Add a photo to this gallery
Retrieved from "https://powerlisting.fandom.com/wiki/Inversion?oldid=1456806"
Community content is available under CC-BY-SA unless otherwise noted.