User can completely bypass/ignore any form of indestructibility ranging from Dual Impregnability including and/or up to Nigh-Absolute Invulnerability.

The Crimson Avenger's Colts (DC Comics) can penetrate the invulnerability of any metahuman and super powered alien... 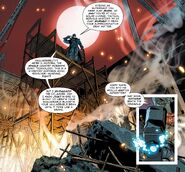 Perfect Dark Gaia (Sonic the Hedgehog/Sonic Unleashed), can bypass Super Sonic's invulnerability.
Add a photo to this gallery
Retrieved from "https://powerlisting.fandom.com/wiki/Invulnerability_Bypassing?oldid=1711597"
Community content is available under CC-BY-SA unless otherwise noted.