Have a body made up of ionic energy.

The power to transform into or have a physical body made up of ionic energy. Technique of Ionic Manipulation and Ionic Radiation Manipulation. Variation of Energy Physiology.

User is made up of or can transform their body completely into ionic energy. Users' transformed form is anatomically identical to their normal form, aside of being made of ions, in which case it contains all to organs and is somewhat vulnerable to attacks. Alternately the user can transform into homogeneous matter, without any part of their form being more important than the other.

Nigh Formed Ionic Beings are or can change into mostly physical beings, with the energy flowing through their being, fortifying their cells, bones and muscles. Their power is mostly focused to their bodies and while they gain some amount of energy-attacks, the changes and applications are mostly internal.

Full-Formed Ionic Beings are completely formed of ions, without anything truly left from their physical form. They gain impressive control over their form and vast capacity to expel energy in various ways. 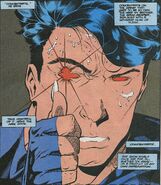 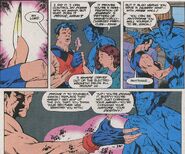 imagining the fingernail to elongate on one hand, which he reverted to it's original shape at beasts suggestion... 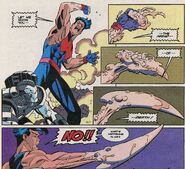 instinctively morphing a once severed limb into a scythe like his brother's...

to tasking on a more feral, monstrous shape... 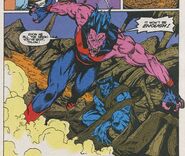 D-Struct (Static Shock)
Add a photo to this gallery
Retrieved from "https://powerlisting.fandom.com/wiki/Ionic_Mimicry?oldid=1274069"
Community content is available under CC-BY-SA unless otherwise noted.